Aikido translates to the way of harmonious spirit. It is a Japanese martial art that was developed by Morihei Ueshiba.

Training focuses on re-directing the force of the attacker rather than using strength to overcome them.

A fundamental characteristic of aikido is concern for the well-being of the attacker, so students learn to protect themselves rather than harm another person.

Aikido training involves learning the physical techniques, cultivating awareness of ones opponent and the self-discipline required to commit to a long term learning process.

Like almost all martial art practices, aikido involves both physical and mental training. Physical conditioning is developed through practice which focuses on moving the whole-body in a coordinated way and assists in the development of flexibility and endurance. The mental aspect of aikido training consists of learning controlled relaxation. This ability is the key to meeting an attacker with confidence and a sense of calm, which enables students to execute the techniques of aikido without hesitation.

One of the first skills students learn is how to safely fall or roll, because aikido consists mostly of throwing ones opponent rather than striking them. After this technique has been mastered, students move on to learn specific techniques against strikes and grabs as well as learning defensive moves such as pinning and throwing. 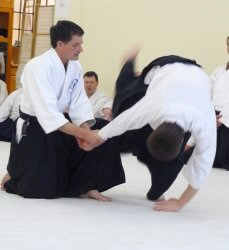 These techniques are taught by partnering two students together following a demonstration by an instructor. In these pairings, one student will attack and the other will utilize a prearranged form as a defence. While aikido training does involve some solo drills, this collaboration among students is the primary way that aikido is taught and learned.

As many of the empty hand techniques of aikido were developed by O Sensei  from traditional sword and spear movements, the practice of these movements is included in our Aikido training. The purpose of this inclusion is first to reinforce the concepts of distance, foot movement, presence and connectedness with your training partner and also to give insight into the origin of techniques and movements, 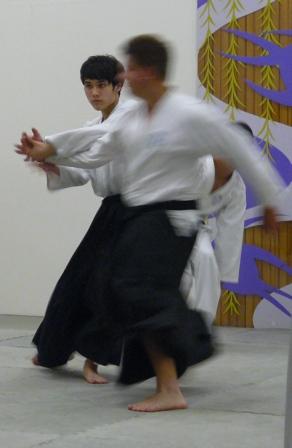 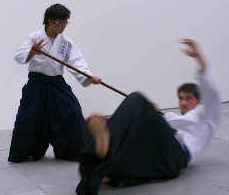 Another feature of aikido training to defence against multiple attackers.

In its basic form this is called Kokyu Nage (literally 'breath throw').

The more advanced freestyle form is Randori. This is a key part of the syllabus for the higher level ranks. Randori, (literally 'chaos'), develops the ability to intuitively perform techniques in an unstructured environment.

The strategic skill of choosing techniques, based on how they reposition the defender relative to the attackers, is important in Randori training. 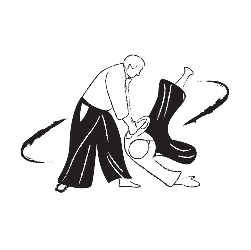